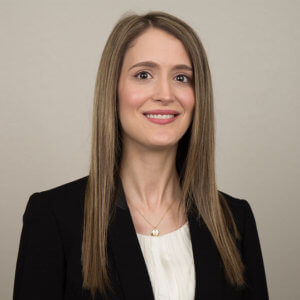 Ms. Kelly Johnson joined Morris Bart, LLC, as an associate in June of 2014. She earned her undergraduate degree from the University of New Orleans in 2009, with a Bachelor of Arts in Political Science and a minor in History. While at UNO, she was a member of Pi Sigma Alpha National Political Science Honor Society and Phi Alpha Delta.

After graduating from UNO, she received her Juris Doctor from Loyola University New Orleans College of Law in 2012. While at Loyola, she was a student practitioner in the Criminal Defense section of Loyola’s Law Clinic where she represented indigent defendants in all aspects of legal proceedings. One of her proudest accomplishments was successfully conducting a two‐day jury trial receiving a unanimous not guilty verdict.

Ms. Johnson is licensed to practice in Louisiana and is a member of the Louisiana State Bar Association.