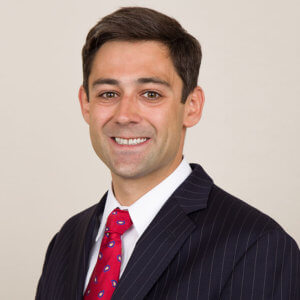 John Richards obtained his Juris Doctorate and Diploma in Comparative Law from the Louisiana State University Paul M. Hebert Law Center in May of 2014. While in law school, he was named to the chancellor’s list for academic achievement and received awards for the highest grade in Legal Research and Writing and Comparative Media Law.

John was very active in trial advocacy and moot court throughout law school. John served on the law school’s Trial Advocacy Board as the Executive Vice President of Opening Statement and Arbitration Competitions. John competed in LSU Law’s Flory Trials in 2012 and 2013, won the competition in 2013, and received the award for “Outstanding Individual Advocate” both years.

Prior to joining Morris Bart, John practiced primarily in the area of insurance defense litigation. John is licensed to practice in Louisiana.